When I learned that I would have just 30 days to exit Japan indefinitely, I knew I had to squeeze in a visit to my friend in Hokkaido, both because we planned on my visiting her sometime that year and because I had wanted to go there since first arriving in Japan. After checking around, i found I could get a dirt cheap ticket on Jet Star, one of asia’s discount airlines. I would fly from Tokyo Narita to Sapporo for a few days at the end of June, then fly down to Nagoya/Gifu area to visit my friends one last time before leaving.

Hokkaido is the northern most island in Japan, and is famous for it’s flower fields in the summer and ice festival in the winter. Winter temps there are similar to Chicago, but they get WAY more snow beginning much sooner in the year. Sapporo is the main city there and is where Sapporo beer is from. If i liked beer, I would have had plenty of options to have some there.

Most people don’t realize that Narita airport is not actually located in Tokyo, it’s outside of the cit, and takes about 90 minutes to get to/from it, depending where in Tokyo you are, and can be pretty expensive. Also, the fast trains to the airport don’t run at all hours. Since I was taking the discount airline, and the cheapest flight was the one leaving around 6am, I decided it would be pointless to stay at a hotel near there, since I’d still have to be at the airport by 5 or so, and paying for a hotel would make the discounted flight pointless. So after researching it a bit, I decided to just sleep at the airport. I had just one small bag with me, and when I arrived I found many others there doing the same thing. I took the cheap bus to the airport for about $15, charged up my phone upon arrival, then found an empty section of the long padded benches to occupy for the next few hours. Around midnight, the staff turned off most of the lights in our area , and security officers made rounds pretty often, so I felt relatively safe. In the morning as the lights were coming back on, I woke up after my nap, and made my way to the convenience store that was open all night to grab a piece of bread for breakfast before my flight. The flight was perfect and came with some pretty amazing scenery – it was just about an hour long and we flew through the puffiest clouds just as the sun was rising, making the clouds appear to be golden.

Keiko met me at the airport and we took the train into Sapporo and got coffee. She took me to her apartment so I could take another nap, and went off to class. We had dinner together later that night, and since she had school all the next day, asked what I planned to do. I said I really wanted to visit the Furano flower fields but hadn’t realized they were about 2 hours away, so even though she thought i was crazy, she agreed to stop in the car rental shop next to her apartment building to inquire about the cost of a rental car for the following day so I could visit the flower fields. There were tour busses going there, but only once or twice a day, and I really didn’t want to be stuck rushing to see things or waiting hours to go back if I was done quickly, and it seemed pretty pricey. At the rental car shop, the agent asked if I had a driving license… a Japense driving license… which he was obviously surprised about when i presented it to him with a smile. He gave me a price that was less than the bus trip, even once I put in some gas, so I decided to make the plan for the car.

Early the next morning I got up, saw Keiko off to school, and went to pick up my car and off I went! I decided early on that I should stop and pick up some water and snacks for the 2 hour drive through the country, and finally decided on a convenience store to stop at. As I was parking, I noticed a strange looking man across the street. He was dressed in old style Japanese clothing, and had his hair tied so that it stood up in a sort of ponytail on his head. He was pushing a cart with a tall skinny banner in Japanese, and was talking to a man nearby. He immediately reminded me of a Japanese manga I had read in high school, called “Lone Wolf & Cub” in English. (See the image below!)
After making my purchases at the shop, I came out to find him “parking” his cart (which turned out to be a converted baby stroller) and talking to someone new. I got in my car and tried my best to read/understand his sign, but I could only read part of it. He went in the shop then came out after a few minutes, and I decided I must try to ask him about what he’s doing. I spent many minutes trying to come up with how to ask him about his sign in Japanese, and eventually decided I better get moving or I’d regret not trying!
I went up to him and tried to ask him about the sign in Japanese, and he could tell I was obviously struggling big time and asked in japanese where I was from. I answered and he switched to English. I learned even though he’s from Japan, he was currently based in New York City and spoke English perfectly. He told me that he had just begun a walk from the northern most part of Japan to the southern point, and had been going for 8 days so far. I also learned his sign said, in Japanese, “Your smile is beautiful”. if you want to know more, you can check out his website. It’s in English. Here’s a pic of the old samurai story, and then a picture of the guy I met, Yoshi.

Lone Wolf and Cub chronicles the story of Ogami Ittō, the Shogun’s executioner who uses a dōtanuki battle sword. Disgraced by false accusations from the Yagyū clan, he is forced to take the path of the assassin. Along with his three-year-old son, Daigorō, they seek revenge on the Yagyū clan and are known as “Lone Wolf and Cub”.

After that, I continued on uneventfully to the flower fields which weren’t quite as full as I’d have liked to see, but were pretty awesome anyway. I’ll put a few pictures here, but I have a ton more over on my flickr, if you’re interested! Also, I ate some lavender ice soft serve ice cream that was really good! 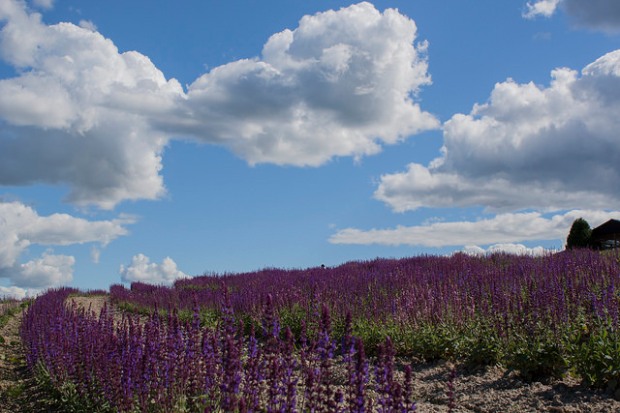 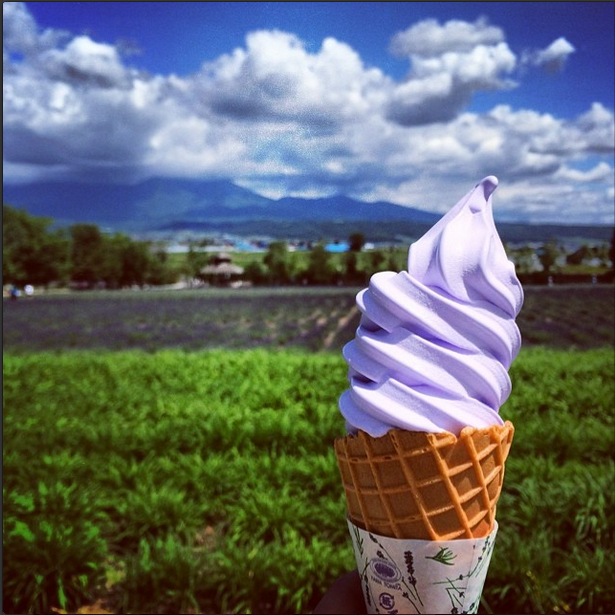 Other than that, i spent the next day walking around some parks and downtown spots in Sapporo. I stumbled upon a flower arrangement show where there was a huge tent with tons of entries on display. There had to be about 100 flower arrangements in there. I think every senior citizen in the whole island of Hokkaido was present to enjoy the flowers that day. 🙂 Everyone seemed to be enjoying themselves!

I also spent a little time drinking coffee in a neat little coffee shop/bookstore on the 3rd floor of an old building in Sapporo. It was called Brown Books Cafe & I grabbed a seat by the window since i was the only one there for a while, and people watched on the street below and doodled. I also chatted with the barista there, Hiromitsu, for a bit and learned that he was a bamboo craftsman. He made me a ring of bamboo and showed me his huge bamboo basket hanging from the ceiling. Here he is with his giant basket! I wish you could see the amazing detail in his work!

Hiromitsu at Brown Books Cafe in Sapporo! He is a bamboo basket weaving artist.

One thought on “NRT – CTS / Flowers & People in Hokkaido.”